Little Sammy Sneeze was one of McCay's first comic strips. Every episode is the same joke, just a different locale. The first panels show Sammy slowing winding up with larger and larger inhales, until he let's his sneeze loose in the 2nd to last panel causing much havoc, and he gets booted in the final panel.

Same thing every week. Poor kid. The fun is seeing the new environment. One week he destroys a grocery store. One week a circus. One week a skating rink. We know the outcome, so it's the anticipation that's the fun.

It's great to flip through these one after the other. The first thing I noticed when seeing them all together in one place was that, not only is the gag the same week to week, but Sammy's pose as he gets booted in the final panel is Exactly the same - at least for the first half of the series. Just different clothes, different "booter." 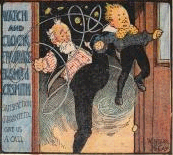 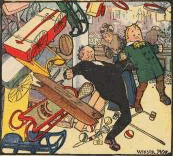 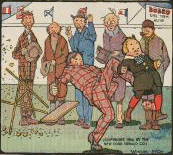 The next thing you quickly realize is how close these panels resemble frames from a clip of animation. (Of course, these all pre-date animation.) The background is a stationary "stage," while the figures make subtle changes in their action over top. No wonder McCay later went on to pioneer animated film. Clearly his mind already worked that way. It would be great to scan some of these and play them one after another in a little six or eight-frame movie...

As a bonus, in this book we also get a collection of another of McCay's cartoons "Hungry Henrietta." Every week she throws a fit until someone gives her something to eat. The comparison/contrast to "Sammy Sneeze" is fascinating. Both are one-gag series. The thing that makes "Henrietta" interesting is that she ages over the course of the series. In episode one, she's a baby. Every week she ages just a bit until eventually she's portrayed as a young lady. Both strips show us the passage of time. While "Sammy" does so weekly in consecutive moments, "Henrietta" instead crawls slowly over the course of years.

There's even a great crossover strip where Sammy and Henrietta meet. Sammy sneezes onto a plate of food. Henrietta picks it up off the floor and eats it. Great fun!

It's yet another great volume from Sunday Press.
Posted by Morpheus at Monday, June 09, 2008

It's nice post to find out about Little Sammy Sneeze!

It's nice to find out about Little Sammy Sneeze!

Thanks! I was able to find all of necessary information about Little Sammy Sneeze. I would come this site often!

He seems to destroy a lot. Poor guy.