So I finally saw the "Little Nemo: Adventures in Slumberland" movie yesterday. (This is the 1992 movie and not to be confused with Winsor McCay's first pioneering animated film "Little Nemo" from 1911). I had always been hesitant to see this movie adaption of McCay's comic series, but it was actually better than I had been expecting. My kids enjoyed it. Most of my fun came from watching for all the things that actually came from McCay's comic... usually the movie just kind of randomly strings them together instead of working them into the plot. Befuddle Hall, the twisty stairs, the car with the goat wheels and frog horn, giant butterflies, the walking bed... all there. The gratuitous flying squirrel sidekick was just that - gratuitous. But he didn't hurt anything. The best part of the film was the Nightmare Goo that grabs Morpheus. Great animation there. 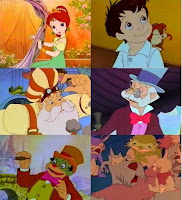 As the credits rolled I was surprised to recognize a lot of names! Chris Columbus, Jean Moebius Giraud, Brain Froud, Ray Bradbury, Canemaker, Richard M and Robert B Sherman -- even Frank and Ollie are listed in there as consultants.

Although entertaining enough for kids, ultimately the story doesn't hold together well. The end battle scene is anticlimactic and unintelligible.

I read these comments from Brad Bird (Iron Giant, The Incredibles) a little while ago: "Jerry Rees and I also worked on [Adventures in Slumberland] for about a month. We were sent down because we were told the project was drifting and were asked to check it out and give our assessment... We were staggered at the quality of the artwork on the walls... AMAZING stuff. We were floating around, talking to people casually, asking them about what they were doing, and they said 'we’re just illustrating what Ray Bradbury is writing'... We asked Bradbury about the story he was writing for the film. “I’m just putting in writing what these wonderful artists are drawing”, he said. Jerry and I looked at each other; 'Uh-ohhh'."
Posted by Morpheus at Monday, June 23, 2008