A Conversation with Robert Winsor McCay !

Robert Winsor McCay, the great grandson of artist Winsor McCay, is enthusiastic about what might become a memorial park in Spring Lake, Michigan, honoring his famous relative. "I could see myself stopping by to pay a visit," he said.

Robert's father, 79-year-old Winsor Robert McCay, was the grandson of the legendary cartoonist, and according to his son, has vague memories him. "He was about 6 when Winsor McCay died, but he has some small stories."

Great grandson Robert said artistic talent has crossed generations of McCays. "My daughter is the one who's got the talent in my (immediate) family." He also said, on occasion, his name draws attention. "I've been asked if I am related to Winsor McCay."

Original Winsor McCay comic artwork, descendent photographs with Walt Disney, and much more exist in the McCay family archives. There is hope that some of these items could be put on loan for a prospective Winsor McCay historical display of work at the Spring Lake District Library.

"Grandma saved everything," Robert said, hinting she was the keeper of the family history until she passed away 7 years ago. "Now all that is in dad's possession."

According to Robert, he and his father, Winsor, will be attending the Annie Awards in a few weeks. "We'll meet with John Canemaker, who is this year's recipient of the Winsor McCay Award." Canemaker is also credited with authoring the definative book on the comic and animation career of Winsor McCay.

Although there was no formal vote, Winsor McCay committee members meeting at the Spring Lake District Library on Friday agreed to a first-step sequence of honoring the legendary cartoonist perhaps during a film festival and display case during Heritage Festival.

"I'm only speaking for myself but I think our Heritage Festival Committee would have no problem with this," [Heritage Festival President Dave] Hamather said. "We would welcome this. We take pride in honoring this community and its residents."

Members of a committee considering ways to honor McCay and his work are trying to tie the animator in with Spring Lake Village's Heritage Festival and possibly the Muskegon Film Festival. If the group is successful, both events could show some of McCay's most famous animated films.

Mat Moore, president of the Muskegon Film Festival, which runs this year from Jan. 31 to Feb. 2, told the committee Friday his organization would be willing to include McCay's works at future festivals.

The next Winsor McCay Honor Planning Commitee meeting (boy - we need to get some sort of name!) is scheduled for March 14 at 4:00 at the Spring Lake District Library. All are welcome to attend!
Posted by Morpheus at Wednesday, January 16, 2008 1 comment:

Putting an 8 where the 7 is 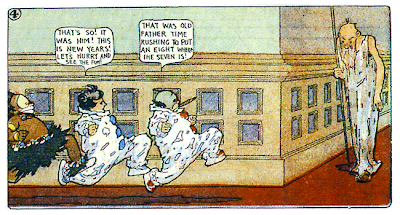 Here's Little Nemo in Slumber Land from exactly 100 years ago today. (You can click it for a larger view) 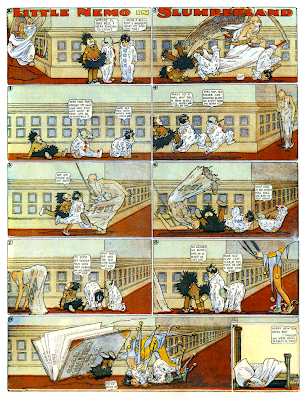 Posted by Morpheus at Tuesday, January 01, 2008 No comments: