This is only dreaming, mind you...

There are quite a few ideas we've tossed around regarding how to honor Winsor McCay here in Spring Lake MI, his hometown. This is just one of them. You can't talk tribute without having statues come to mind. Here's a quick sketch by illustrator Aaron Zenz: 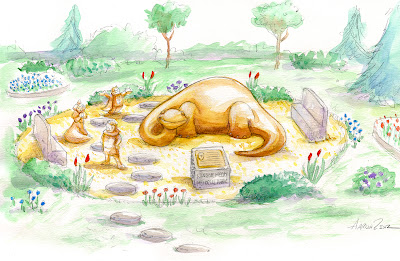 This is just a starting place to get some thoughts rolling. When the idea of a Winsor McCay memorial pops up, I think the universal first reaction is "Gertie statue!"

In my opinion, I think a Gertie statue would have to meet two requirements. Number one: it's got to be a real statue, like bronze. And number two: it has to be designed in such a way that kids are encouraged to climb all over it. You've gotta. I mean, even Winsor McCay got to ride Gertie, right? So keep it safe just like the sketch above (don't have Gertie's neck up high so kids are falling off). But at the same time, don't sacrifice number one - keep it real. It can't be some kind of foamy playground equipment.

The Central Park Alice in Wonderland statue in New York is a super example.

I think it's great that the above concept drawing also includes Little Nemo characters scattered around. And just as food for thought... at the park, wouldn't it be cool if you could also sit inside something like this:

Or if you could look in mirrors that do this:

Again we're at the very beginning here. This is just dreaming. But for Winsor McCay, wild Dreams are more than appropriate...
Posted by Morpheus at Wednesday, November 28, 2007

Gertie was actually my second thought. My first thought was a life-sized bronze of WM himself, with some of his characters around him in child-sizes. Similar to the John Ball statue in GR, so children can climb all over it.

It was only after that when I though of Gertie. Then I thought make her to scale, too, like in WM show. Make her just really big, but include a slide element so children can get inside her and slide down from her head to her tail.

So let me open it up... Not that we are definitely doing a statue, but if that does turn out to be the case, what ideas spring to mind? Does anyone else want to weigh in on design ideas? Or even comment on the merits of a statue in the first place -- is Winsor worthy?