I was looking through David Seibold's new book on the history of Grand Haven MI, In the Path of Destiny, and was amazed to see this included in the section about Winsor McCay: 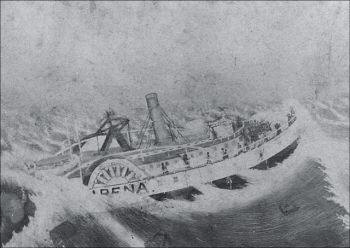 "Spring Lake's Great fire of 1893 destroyed the school and all the records which might have revealed some of the genius of the budding artist. But perhaps all was not lost. On October 15, 1880 the ill-fated Goodrich steamship Alpena left Grand Haven bound for Chicago with 46 persons aboard. It was never seen again. The event stunned everyone in the Grand Haven Area. In 1880, at age 11, Winsor McCay made a chalk drawing on a slate of his impression of the Alpena as it was sinking on a story Lake Michigan. The teacher was so impressed with the rendering she had a photographer take a picture of it, who then sold copies. A postcard appeared at that time which showed the sinking of the Alpena and, presumably, was the photo of the Winsor McCay drawing. A copy is in the Museum files."

I've never seen this photo reprinted anywhere else before... What a great find! The photo dates from the right time and is certainly white chalk on black slate. This whole story is especially interesting when one considers McCay's later animated masterpiece which depicted the sinking of the Lusitania. Perhaps the creation of that film was spurred, in part, by the emotional connection to this first moment of artistic celebrity from his childhood...
Posted by Morpheus at Monday, July 21, 2008

History when it comes to art is always fascinating to me.