We've sure learned a lot since we started meeting a year ago. Here's a blurb from one of the very first posts on this blog:

Years ago I had asked someone at the Tri-Cities Museum if there was any way to know where McCay might have lived -- or even to determine a geographic location where we could say he had definitely been. She said she highly doubted it because the layout of Spring Lake is very different now because so many fires had destroyed the town since McCay's time. The fires had also destroyed most records from those days.

That post then went on to relay how excited we were to discover the site of McCay's former school... A plot of land right next door to the current site of the Spring Lake District Library: 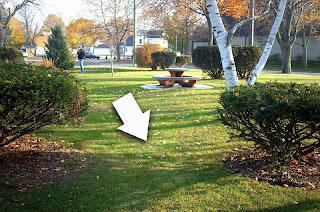 Well since that early post, we've discovered the location of Winsor McCay's childhood home! Little did we know we were already looking at it... It was right here: 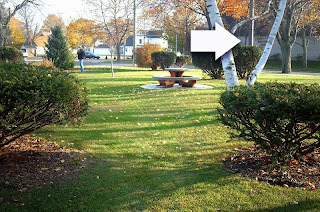 Turns out the site is right across the street, on the corner of Meridian and Tolford, in the spot where the First Baptist Church building now stands. 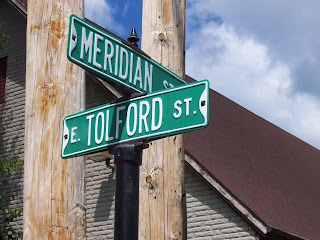 Here's some information about the site that librarian Chris Davis has pulled together:

Robert McKay, Winsor McCay’s father, came to Spring Lake to work in 1864 or ’65. Our collection of Assessment Rolls dates back to 1874. By that time, the McKay’s (McCay’s) owned a house at the corner of the current Tolford and Meridian Street. We do not know the date of the fire mentioned in Winsor's biography, but the McKay’s (McCay’s) owned that property throughout their life in Spring Lake. It would be logical to think that their house burned in one of the frequent fires, as Spring Lake had numerous sawmills at that time. They probably would’ve stayed with friends, temporarily, until their home was rebuilt. The house is gone by 1899, likely destroyed in the Spring Lake Fire of 1893.

Most written accounts tend to paint the McKays (McCays) as a rather transient family in Spring Lake. This is, apparently, not the case. Actually, Robert McKay was a land owner, near the center of the village (which was a status symbol in those times). He was well respected, as his service on the Village Council would attest. In 1874, he received 157 votes for Trustee, only about 90 less than the Village Recorder, who ran unopposed. Many of the people in political circles, at that time, are still known in the community today (Hunter Savidge, Aloys Bilz, etc.).

I wonder of the chuch has to sign on for a historic marker. This is certainly a worthy location for one.

This is exciting! Great sleuth work... and I'd like to add that the neighborhood in question is still regarded by some of us as a status symbol (he says smugly, from River St., a block away from the McCay home site).

Winsor's father Robert appears in the Assessment Rolls (property owners) of Spring Lake MI. The specific location according to the records is the “south half of Lot 5, Block 3, of the Haire, Tolford, and Hancock Addition, in SL” which should be the NW corner of present-day Meridian and Tolford Streets (where the church now stands)

I would be interesting to hear how where he lived inspired him with his art.